The Myth of “Mean Girls”

Bullying can take many forms: hitting or pushing (physical bullying), teasing or calling others bad names (verbal bullying).  And it also involves relational forms, such as manipulating peer relationships by spreading nasty rumors, threatening to terminate friendships or excluding someone from a social group.  Students who are bullied in any of these ways may suffer from depression and anxiety, and have academic problems.

In the past two decades, relational aggression has received an abundance of media attention.  Books, movies and websites have portrayed girls as being cruel to one another, thus creating and reinforcing the stereotype of “mean girls.” However, this popular perception of girls being meaner than boys is not always supported by research. While data from the U.S. Department of Education shows some differences between how boys and girls experience bullying – for example, girls were more likely than boys to report experiencing verbal bullying and rumor-spreading –, several large cross-cultural studies and meta-analyses have found no gender differences in relational aggression.

The Healthy Teens Longitudinal Study is one of the few research studies that has examined how relational aggression changes during the teen years. It followed a group of 620 students for 7 years, surveying them annually from grade 6 through 12.

This study found that perpetration of relational aggression was highest in middle school and declined in high school for both boys and girls. However, boys reported more aggression than girls across all grade levels.

Additionally and as shown in the graph below, this study found three patterns of behavior or trajectories in the perpetration of relational aggression from grade 6 through 12: 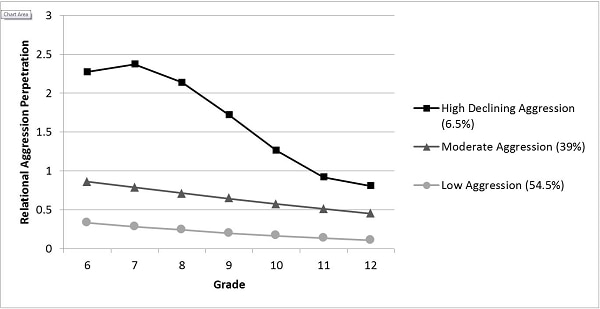 This study was published in the journal Aggressive Behavior.