State and local lawmakers have taken action to prevent bullying and protect children. Each jurisdiction, including all 50 states, the District of Columbia and U.S. territories (state), addresses bullying differently.  Some have established laws, policies, and regulations. Others have developed model policies schools and local educational agencies (districts) can use as they develop their own local laws, policies and regulations. Most state laws, policies, and regulations require districts and schools to implement a bullying policy and procedures to investigate and respond to bullying when it occurs. A handful of states also require bullying prevention programs, inclusion of bullying prevention in health education standards, and/or teacher professional development. These state laws generally do not prescribe specific consequences for kids who engage in bullying behavior, and very few classify bullying as a criminal offense. Further, states may address bullying, cyberbullying, and related behaviors in a single law or across multiple laws. In some cases, bullying appears in the criminal code of a state that may apply to juveniles.

Common Components of State Anti-Bullying Laws and Regulations show the components in each state’s laws, policies, and regulations, allowing for a quick comparison of how each state compares. Click on a state or territory below to find out more about their anti-bullying laws and policies and which of the key components they contain. 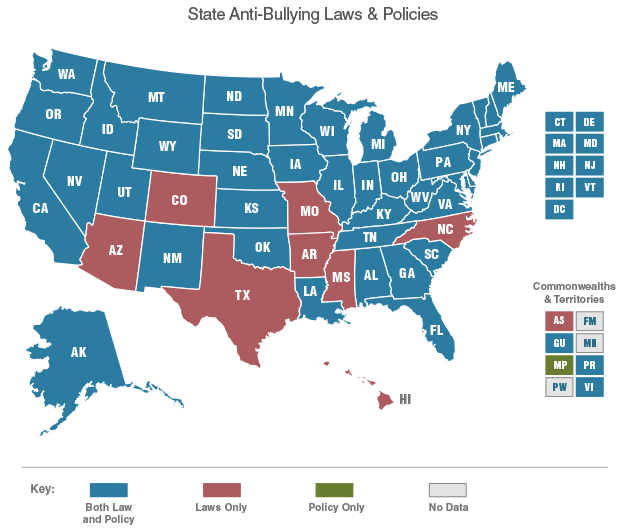 There is no federal law that specifically applies to bullying. In some cases, when bullying is based on race or ethnicity, color, national origin, sex, disability, or religion, bullying overlaps with harassment and schools are legally obligated to address it. Read more about when bullying overlaps with harassment and how to report it to the U.S. Department of Education’s Office for Civil Rights and U.S. Department of Justice's Civil Rights Division.