Bystanders are Essential to Bullying Prevention and Intervention 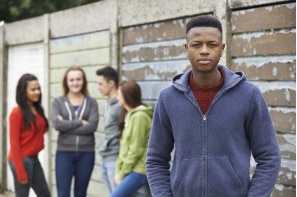 Bullying can have significant mental, developmental, and social effects, which is why it is a public health concern. When it comes to prevention many people can take an active role to intervene – especially bystanders. A bystander to bullying is anyone who witnesses bullying either in person or in digital forms like social media, websites, text messages, gaming, and apps. When bullying occurs, bystanders are present 80 percent of the time.1 A bystander has the potential to make a positive difference in a bullying situation, particularly for the youth who is being bullied. When youth who are bullied are defended and supported by their peers, they are less anxious and depressed.2 When bystanders to bullying intervene, bullying stops within 10 seconds 57 percent of the time.1 Sometimes adolescents and young adults who witness bullying are not sure what their role is and or what they can do to address bullying. 3

Cyberbullying has also been linked to psychological problems. Kids who have been cyberbullied reported higher levels of depression and thoughts of suicide, as well as greater emotional distress, hostility, and delinquency compared with peers who were not.

While bullying can lead to psychological problems, kids who have mental health concerns to begin with are also more likely to be bullied. Therefore, this is a complex cycle that is not easy to study and understand.

Why Bystanders Intervene or Not

There are many reasons why youth may or may not intervene or defend the target of bullying.

Some reasons bystanders do not intervene or respond to the bullying include:

Bystanders do intervene or defend the targets of bullying because they:

Bystanders can take positive actions to prevent bullying and to address it while it is happening or after it occurs. Parents, teachers, and other caring adults can recommend safe ways that bystanders can prevent, intervene, or address bullying.

Bystander interventions during a bullying incident may include:

Bystanders can address bullying after it happens by:

Teachers and schools play an important part in helping students understand their roles in bullying situations. When teachers and schools address bullying consistently, students have an expectation that the role they play in bullying matters. Teachers can conduct activities to enhance student’s social emotional learning and provide safe strategies for supporting their peers.2 Adults in schools can also be role models, reward positive social behavior, and set the tone for healthy social relationships. By understanding the different roles they play in bullying situations, bystanders can take positive actions to address and reduce bullying.

This report includes the most up to date research on bullying, but it is important to note that this research has several important imitations. Most of the research is cross sectional, which means it took place at one point in time. This type of research shows us what things are related to each other at that time, but cannot tell us which thing came first or if one of those things caused the other to occur.

Another limitation is that many of the studies use self reports to identify who bullied or was bullied and to capture symptoms or experiences. While the use of self report is common in bullying research, it can result in biases or errors. The study participants must report information accurately, and some children may not want to admit to others that they have been bullied or have bullied others.